a few members of our food and beverage leaders…

Clay Elkins joined The Sporting Club team in 2006. Beginning as Assistant Manager of Dining Services, he was promoted to Director of Food and Beverage in 2011. He graduated from Appalachian State University with a degree in Business Management and IT. In 2006, he graduated from Johnson & Wales University with a degree in Culinary Arts. Outside of the dining room, Clay can be found skiing and biking with his son, Tad.

“I really have enjoyed the relationships built with the members during my time here.  It’s great to see some of the kids grow from elementary school to college.  I planned on being here two years and I’m pushing ten.  I love how easy it is to sneak off to the woods for a hike, bike ride, or a float down the river.  Skiing and snowboarding is an easy drive, and I can still be in many major cities fairly quickly.” – Clay Elkins 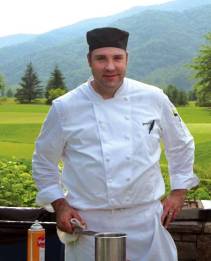 Culinary Apprenticeship Program before excelling in various positions at the resort. He worked in their Culinary Arts Center – the nation’s first resort cooking school – and for Certified Master Chef, Peter Timmins, as Saucier, Sous Chef, and Chef de Cuisine, as well as with celebrity chefs such as Julia Child and Anne Willan. He also served six years as Restaurant Chef in the The Greenbrier’s Tavern Room, a Forbes/Mobile four-star restaurant, and maintained the four-star status. Five of those years were under Certified Master Chef Richard Rosendale, while he was captain of the U.S. Culinary Olympic Team, and the last year was under Michael Voltaggio of INK restaurant and winner of Top Chef’s season 6. His talents then led him to the Washington Duke Inn and Golf Club in Durham, NC, where he served as Chef de Cuisine before returning to The Greenbrier in 2007 as Sous Chef and chairman of The Greenbrier Culinary Apprenticeship Program.

In April 2011, Chef Miller joined The Sporting Club’s culinary team and has held the positions of Sous Chef and Chef de Cuisine for The Members’ Lodge restaurant. Through his culinary contributions and introduction of a complete charcuterie program, he has elevated the quality of cuisine for our members. His focus is on locally sourced foods and building relationships with the members, local farmers, and community. He keeps the food as true to the Appalachians as possible, while showcasing those things that make West Virginia so very special.